As Southern Californians get ready for Labor Day holiday getaways and cookouts, gas prices are moving very little throughout the region, according to the Automobile Club of Southern California’s Weekend Gas Watch. Today’s retail statewide average is $3.24 a gallon for regular unleaded, one cent higher than last week.

“Those getting away for the Labor Day holiday will be spending about $6 less to fill up their tanks compared to last year,” said Auto Club spokesman Jeffrey Spring. “Record temperatures expected this weekend can lead to tire blowouts and battery failures, so make sure your vehicle is in good condition before heading on your road trip and bring enough water in your vehicle for everyone.”

The Weekend Gas Watch monitors the average price of gasoline. As of 9 a.m. on Sept. 3, averages are: 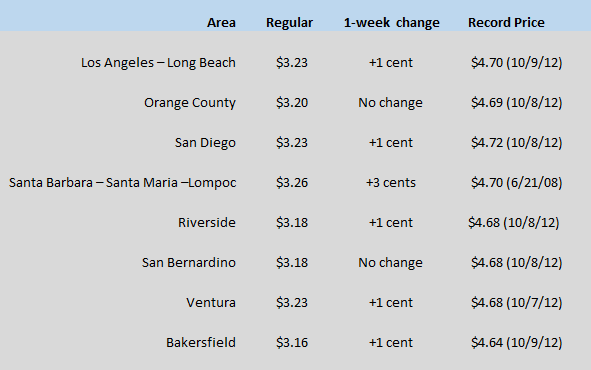