The average price of regular gasoline moved up by 3-5 cents per gallon over the last week in most Southern California cities due to increasing demand and flatter production levels at refineries, according to the Automobile Club of Southern California's Weekend Gas Watch. Today’s retail statewide average is $2.77 a gallon for regular unleaded, up three cents from last week and $1.29 less than last year.

“Vehicle traffic in Southern California has increased incrementally over the past few weeks, and refineries are still producing gasoline at a much lower rate compared to last year to help draw down inventory,” said Auto Club spokesman Jeffrey Spring. “Combine these trends with an increase in oil prices, and the result is that gas prices changed course over the past week and increased.”

The Weekend Gas Watch monitors the average price of gasoline. As of 9 a.m. on May 14, averages are: 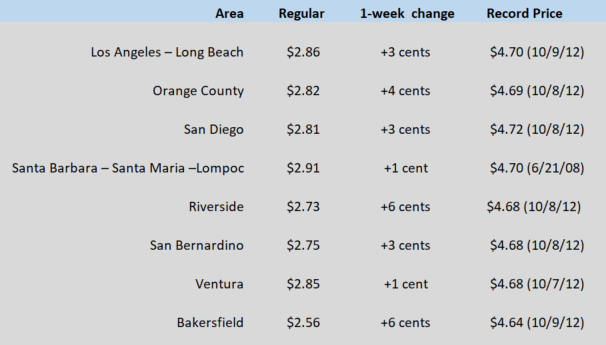