The average price of regular gasoline moved up another 3-6 cents per gallon over the last week in most Southern California cities due to increasing demand and oil prices and reducing gasoline inventories, according to the Automobile Club of Southern California's Weekend Gas Watch. Today’s retail statewide average is $2.83 a gallon for regular unleaded, up six cents from last week and $1.29 less than last year.

“The last time California Memorial Day travelers saw average gas prices this low was in 2016,” said Auto Club spokesman Jeffrey Spring. “However, in many cities gas prices are now higher than they were a month ago, reflecting the fact that more people are driving than a month ago. As the state continues to gradually open the economy, we can expect to see gas prices continue to rise.”

The Weekend Gas Watch monitors the average price of gasoline. As of 9 a.m. on May 21, averages are: 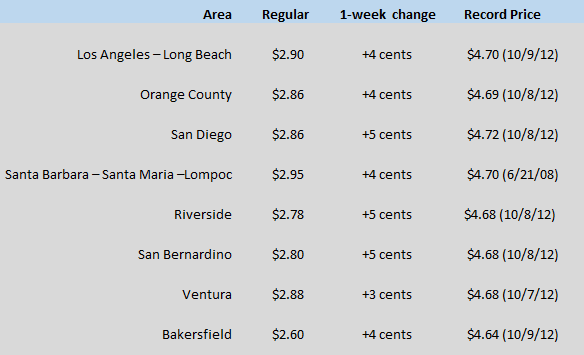