Southern California gas prices rose for the ninth straight week, and recent reports of tightened supplies mean that trend is likely to continue in the coming weeks, according to the Automobile Club of Southern California’s Weekend Gas Watch. Today’s retail statewide average is $3.50 a gallon for regular unleaded, which is three cents higher than last week.

“This week’s ice storms in Texas shut down oil refinery production but that is unlikely to affect prices locally because California receives no oil from Texas,” said Auto Club spokesman Jeffrey Spring. “However, there are reports of tightening supply from local refineries, and that is likely to drive Southern California prices even higher in coming days.”

The Weekend Gas Watch monitors the average price of gasoline. As of 9 a.m. on Feb. 18, averages are: 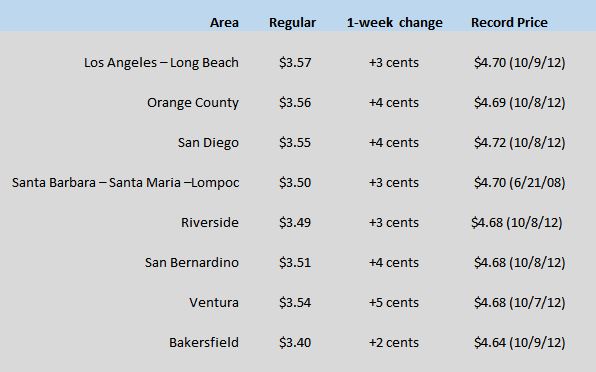