Southern California gasoline supplies and refinery utilization increased over the past couple of weeks, but local pump prices stayed stable or declined just slightly, according to the Automobile Club of Southern California’s Weekend Gas Watch. Today’s retail statewide average is $3.23 a gallon for regular unleaded, one cent lower than last week.

“Oil Price Information Service reported that West Coast refinery utilization rates were at their highest levels in nearly six months, and gasoline inventories are up as well, which has lowered wholesale prices,” said Auto Club spokesman Jeffrey Spring. “However, the pandemic and drop in business at gas stations seems to have made them more reluctant to lower prices even when their own costs drop.”

The Weekend Gas Watch monitors the average price of gasoline. As of 9 a.m. on Sept. 17, averages are: 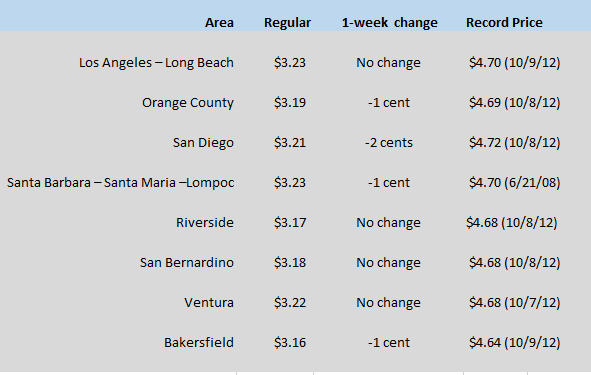