Southern California is entering the new year with the likelihood that gas prices will continue hovering at current levels or higher despite significant drops in demand because local refineries are shrinking production capacity, according to the Automobile Club of Southern California’s Weekend Gas Watch. Today’s retail statewide average is $3.24 a gallon for regular unleaded, which is three cents higher than last week.

“The pandemic and state regulations have fundamentally changed the landscape of the gasoline market in 2020, according to Oil Price Information Service and other oil industry analysts,” said Auto Club spokesman Jeffrey Spring. “The pandemic stay-at-home orders drove down demand. But announcements regarding the future of gasoline-powered vehicles in the state and anticipation of more stringent environmental regulations on refineries have caused one refinery to close indefinitely and others to announce they will close in the future or transition to producing low-carbon fuels. That means an even tighter gasoline market with more potential for price spikes from refinery disruptions.”

The Weekend Gas Watch monitors the average price of gasoline. As of 9 a.m. on Dec. 31, averages are: 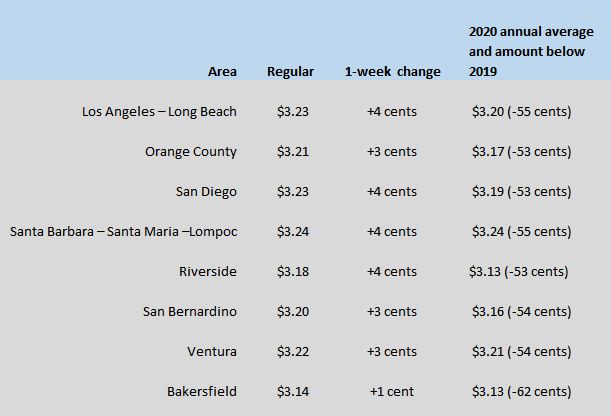