Southern California gas price averages are at their highest level in nine years and are now within 25 cents of their all-time record in October 2012, according to the Auto Club’s Weekend Gas Watch.  The average price for self-serve regular gasoline in California is $4.46, which is three cents higher than last week.  The average national price is $3.30, which six cents higher than a week ago.

“The last time that prices were this high, it was in response to a shortage of summer blend gasoline and the governor stepped in to allow early sales of winter blend to alleviate the crisis,” said Auto Club spokesman Jeffrey Spring. “This year, there is not a shortage crisis, and the high prices are due to a combination of higher oil prices, inflationary pressures which add to higher overhead costs for gas stations, carbon costs for refineries and higher taxes.

“While we would usually expect a cost decrease of 12 cents per gallon or so once stations start selling winter blend gasoline on Nov. 1, indications are that higher butane and oil costs this year will make that cost decrease less significant,” Spring added.

The Weekend Gas Watch monitors the average price of gasoline. As of 9 a.m. on Oct. 14, averages are: 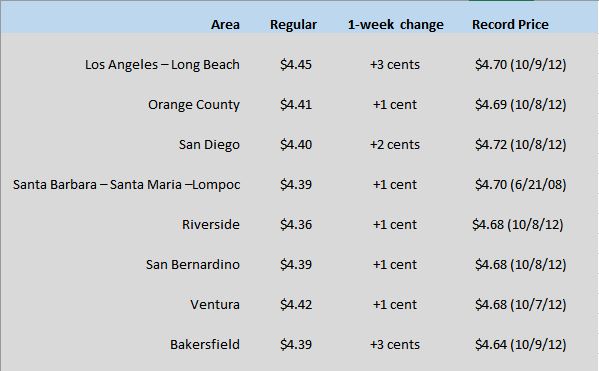