Many Southern California law enforcement agencies are reporting an increase in vehicle thefts and burglaries due to the pandemic. The reasons law enforcement give for the spike in auto crimes include: drivers are at home and not using or checking on their vehicles as much, summer school classes and activities are cancelled giving teens more free time, and criminals are looking for crimes of opportunity.

Auto crimes typically increase in the summer and are increasing more this year due to the pandemic, which is why the Auto Club reminds vehicle owners to protect their property. Although the National Insurance Crime Bureau (NICB) reports that auto thefts nationally have fallen for the last two years, they are up this year. According to the FBI, a motor vehicle is stolen every 42 seconds in the U.S., totaling $6.3 billion per year.

In California, more than 151,000 cars and trucks were stolen in 2019, at an estimated total value of approximately $1.2 billion, according to the California Highway Patrol. The Golden State leads the nation in the number of auto crimes involving drivers who leave keys or fobs inside their cars and trucks.

CHP data shows during the first six months of this year (1/1/20 to 6/30/20), there were 24,850 vehicle thefts in Los Angeles County, which is nearly a 22 percent increase over the same period last year. The Los Angeles County Sheriff’s Department reports 19 stations have seen increases in grand theft auto, and 15 of those stations saw double-digit increases.

“There are many steps vehicle owners can take to prevent thieves from stealing their belongings or their vehicle, which is one of the most expensive items people own,” said Claudia Rodriguez, Auto Club Vice President of Claims. “In many instances, drivers leave their doors unlocked, as well as their keys and valuables in the car, which invites criminals who are taking advantage of the situation we’re all in right now.” 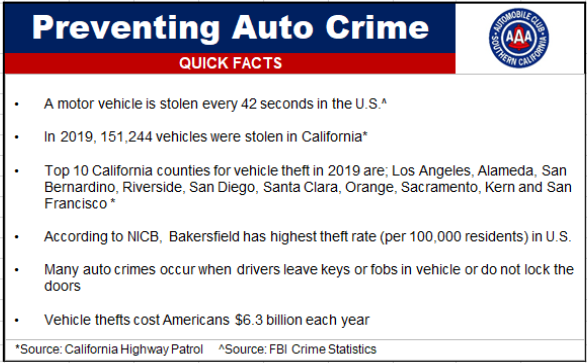 The Auto Club offers the following tips to prevent vehicle theft and burglary: