Gas prices in most areas of Southern California headed slightly downward and posted their second weekly drop of the year, but wholesale prices have tumbled much faster and are now the lowest in the U.S., according to the Auto Club’s Weekend Gas Watch.  The average price for self-serve regular gasoline in California is $4.39, which is one cent lower than last week.  The average national price is $3.19, which is one cent higher than a week ago.

“Tom Kloza of Oil Price Information Service reports today that wholesale Los Angeles gasoline is trading at about $2.15 – more than $2 below current retail price averages,” said Auto Club spokesman Jeffrey Spring. “A combination of plentiful imported gasoline in Southern California and Ida-related increased gasoline costs elsewhere is the reason for this unusual situation. We should be starting to see some substantial retail price decreases soon.”

The Weekend Gas Watch monitors the average price of gasoline. As of 9 a.m. on Sept. 16, averages are: 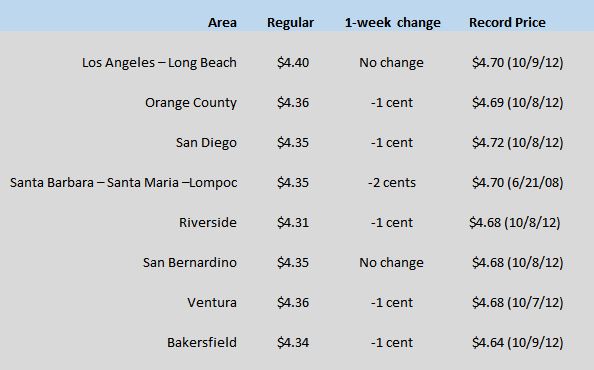