The historic Auto Club building at Figueroa Street and West Adams Boulevard in Los Angeles is celebrating its 100th birthday on Jan. 27, 2023.

The iconic structure is a showpiece example of the Spanish Colonial Revival architecture style that was a staple of Southern California design in the 1920s and helped define the character of numerous neighborhoods from San Diego to Santa Barbara.

Designed by architects Sumner Hunt and Silas Burns, the three-story building opened as the Auto Club’s new headquarters on Jan. 27, 1923. Its imposing size symbolized the success and growth of the Auto Club since it was founded in 1900. It continues to be used as an Auto Club branch office, serving greater downtown Los Angeles, and also houses Auto Club support staff, AAA’s Automotive Research Center, and ClubLabs, the technology and design space that is digitally accelerating the Auto Club and other AAA clubs around the U.S.

“From the red-tiled roof with the mosaic-tiled cupola perched on top to the palm tree-filled Spanish courtyard, the Auto Club’s historic building brings visitors back to a time of everyday elegance in public spaces,” said Auto Club Archivist Morgan Yates. “Its architecture style was so popular with members that it inspired the design of Auto Club branches built in Southern California into the 1940s.”

In recognition of the building’s architectural and historic significance, the City of Los Angeles designated it as a Historic-Cultural Monument in 1971. 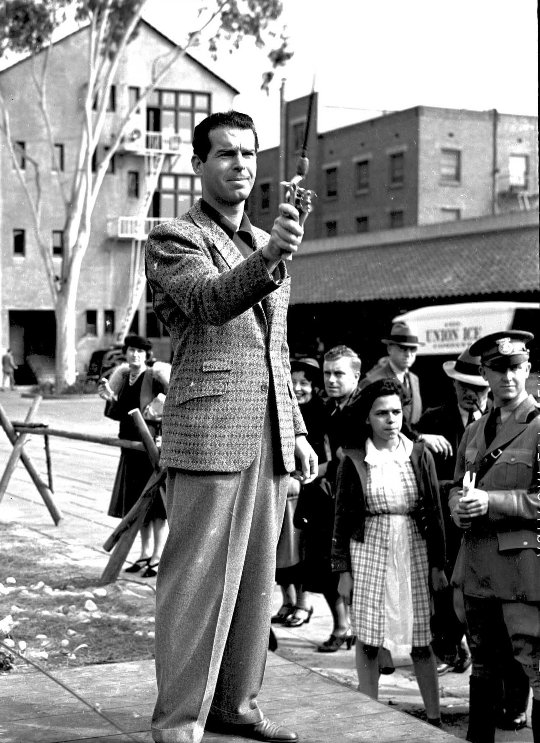 Actor Fred MacMurray practices his casting skills at one of the Auto Club Outing Shows in the 1930s hosted in the courtyard of the historic Auto Club Building.

Over the years, the building has served the surrounding community by hosting events such as its annual Outing Shows in the 1930s attended by thousands of members to help them plan budget-friendly recreation options during the Great Depression. For many years, the Auto Club’s signposting department was housed in the building and installed road signs throughout Southern California into the 1950s before public agencies took over the job.

During World War II, employees based at the Los Angeles building were busy supporting the war effort. The Club posted 7,500 signs in Southern California reminding motorists to dim their lights along coastal roads to avoid illumination that could attract an enemy attack. The Cartography Department devoted itself to the war effort by creating maps for defense purposes, while Auto Club engineers provided Gen. George C. Patton with road-building expertise for the North Africa campaign. The Public Safety Department trained military and support drivers, and created the “Give Them A Lift” campaign to provide free rides to military personnel on leave. And Auto Club staff supported rationing, conservation and war bond efforts. 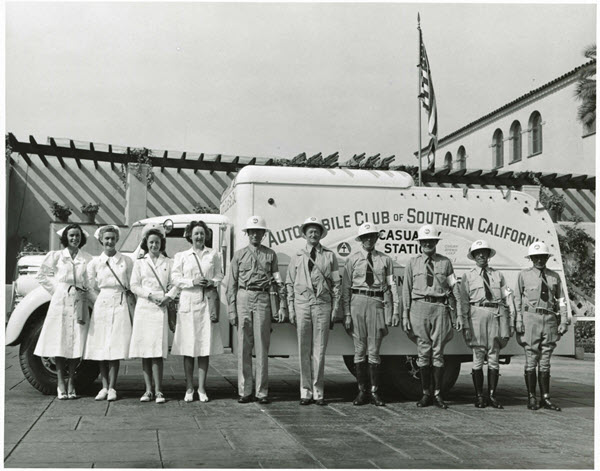 The Auto Club was involved in many key World War II support activities at its historic Los Angeles building, including the donation of an Auto Club signposting truck to be used in civil defense efforts.

With the post-World War II population boom, the Auto Club building staff turned its attention to helping the region address a huge growth in traffic as well as pollution caused by industry and vehicles. It opened the Automobile Research & Emissions Center in the building in 1967 to help the state pioneer and conduct vehicle smog tests.

“Coming to work every day in this building and caring for the many historic photographs of the facility taken over the years, I am continually reminded of the generations of Auto Club employees who have worked here,” said Yates. “There’s a pride that comes from working for an organization that’s been around for more than twelve decades, and no place represents that better to me than our old building at Adams and Figueroa.”

Events to celebrate the centennial are planned throughout the year, including a public “Call of the Open Road” travel show that will pay tribute to the 1930s Outing Shows, an exhibit in the building’s member branch showcasing its history, and a holiday tree-lighting ceremony for the historic Moreton Bay fig tree in front of the building.