Despite the allowed switch to selling cheaper “winter blend” gasoline this past Sunday, gas prices moved very little over the past week, according to the Automobile Club of Southern California’s Weekend Gas Watch. Today’s retail statewide average is $3.18 a gallon for regular unleaded, which is a penny lower than last week.

“News reports of maintenance issues at Chevron refineries in El Segundo and Richmond may have something to do with gas prices staying where they are and not dropping as much as would be expected at this time of year,” said Auto Club spokesman Jeffrey Spring.

The Weekend Gas Watch monitors the average price of gasoline. As of 9 a.m. on Nov. 5, averages are: 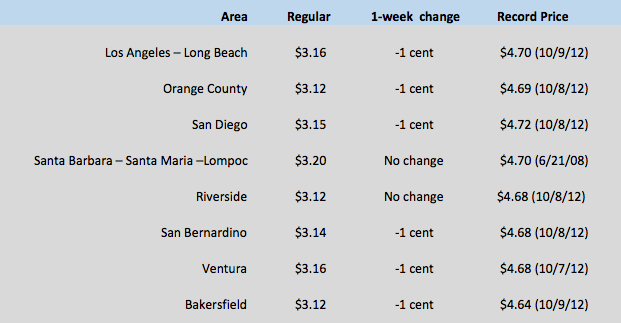