Gas prices moved very little over the past week, but could drop soon with new pandemic-related lockdown orders, according to the Automobile Club of Southern California’s Weekend Gas Watch. Today’s retail statewide average is $3.18 a gallon for regular unleaded, which is the same as last Thursday.

“With new stay-at-home orders issued by the city of Los Angeles, we could be seeing another drop in gasoline demand,” said Auto Club spokesman Jeffrey Spring. “According to Oil Price Information Service, California’s fuel demand is now 19 percent below a year ago, and at the height of the lockdown in April it was 55 percent below 2019 levels.”

The Weekend Gas Watch monitors the average price of gasoline. As of 9 a.m. on Dec. 3, averages are: 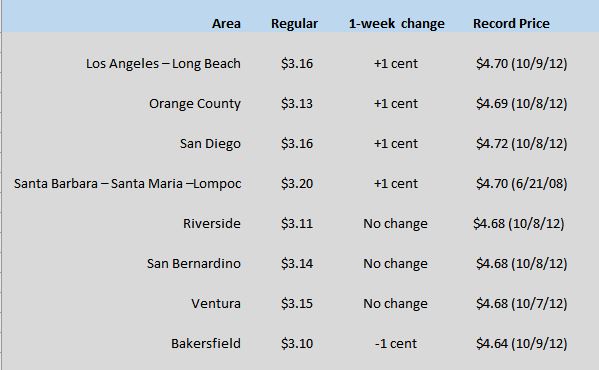