Southern Californians saw a second week of double digit drops in gasoline prices as oil prices and demand for fuel have plummeted below where they were at this time last year, according to the Automobile Club of Southern California's Weekend Gas Watch. Today’s retail statewide average is $3.12 a gallon for regular unleaded, which is 16 cents less than last week.

“With many people staying or working at home this past week, gasoline demand has continued to weaken,” said Auto Club spokesman Jeffrey Spring. “Combined with the ongoing oil price war between Saudi Arabia and Russia, we could see the average price in areas close in on $3 per gallon, with many stations selling regular gasoline for much less than that.”

The Weekend Gas Watch monitors the average price of gasoline. As of 9 a.m. on March 26, averages are: 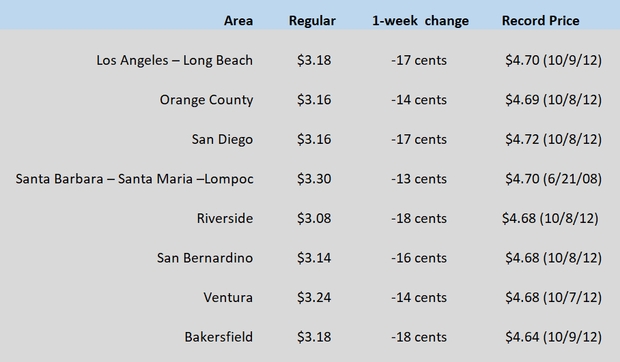