The average price of gasoline continued to decline over the last week by 1-2 cents in most Southern California cities due to a continued draw down of inventory, significant reduction in refinery production and increased demand, according to the Automobile Club of Southern California's Weekend Gas Watch. Today’s retail statewide average is $2.74 a gallon for regular unleaded, which is a penny less than last week and $1.36 less than last year.

“In the past week, Saudi Arabia increased its barrel price for oil, refineries in the region continued to reduce production and demand continued to increase incrementally,” said Auto Club spokesman Jeffrey Spring. “This is the second week of very small price declines, with some cities seeing flat prices or a slight increase.”

The Weekend Gas Watch monitors the average price of gasoline. As of 9 a.m. on May 7, averages are: 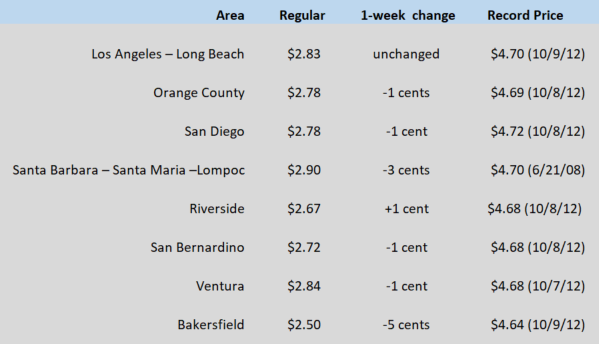