Southern California gasoline stations will be allowed to start selling the cheaper “winter blend” of fuel starting on Sunday, which should help drive down more gas station prices well under $3 a gallon, according to the Automobile Club of Southern California’s Weekend Gas Watch. Today’s retail statewide average is $3.19 a gallon for regular unleaded, which is the same as last week.

“Southern California wholesale prices have dipped by more than 30 cents since Sept. 1, and with winter blend gasoline on the way, there will be a lot of downward pressure on gas prices,” said Auto Club spokesman Jeffrey Spring. “In this reduced-demand environment, many individual gas stations are reluctant to reduce gas prices, so it’s important that consumers shop around for the cheapest gas prices using tools like the free AAA Mobile app.”

The Weekend Gas Watch monitors the average price of gasoline. As of 9 a.m. on Oct. 29, averages are: 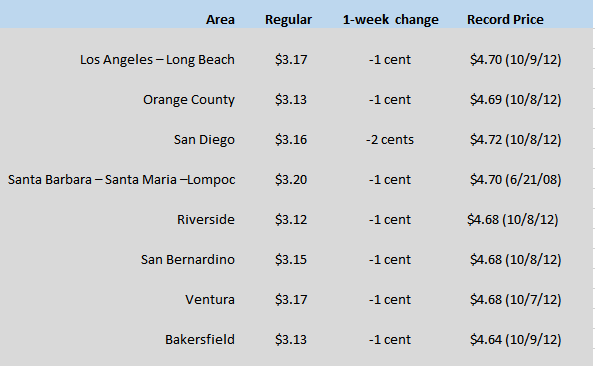