Southern California gas prices moved hardly at all in most areas but are now more than a dollar lower than they were this time last year, according to the Automobile Club of Southern California’s Weekend Gas Watch. Today’s retail statewide average is $3.21 a gallon for regular unleaded, which is unchanged from last week.

“At about this time last year, an explosion that damaged the Torrance refinery caused prices to skyrocket temporarily over $4 a gallon, but today supplies are stable and gas prices are hardly moving,” said Auto Club spokesman Jeffrey Spring. “Because of the pandemic this year, the average gas price for the first three quarters of this year in Southern California is about 50 cents lower than for the first three quarters of 2019.”

The Weekend Gas Watch monitors the average price of gasoline. As of 9 a.m. on Oct. 8, averages are: 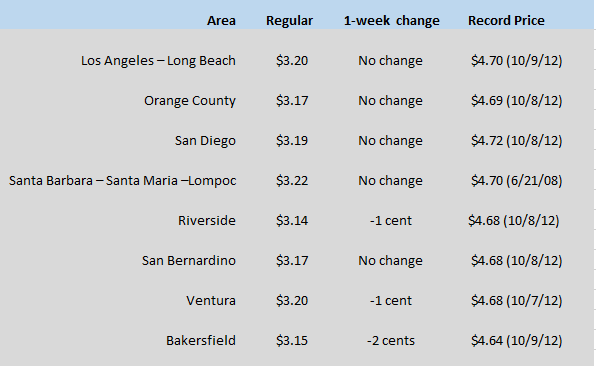