Gas prices dropped slightly or remained steady locally in a pattern that has now lasted for 12 straight weeks, according to the Automobile Club of Southern California’s Weekend Gas Watch. Today’s retail statewide average is $3.17 a gallon for regular unleaded, which is one cent lower than last week.

“Oil industry analysts say that two Southern California refineries that were undergoing planned maintenance are coming back online shortly,” said Auto Club spokesman Jeffrey Spring. “We will have to see if that has any impact on prices falling more quickly.”

The Weekend Gas Watch monitors the average price of gasoline. As of 9 a.m. on Nov. 19, averages are: 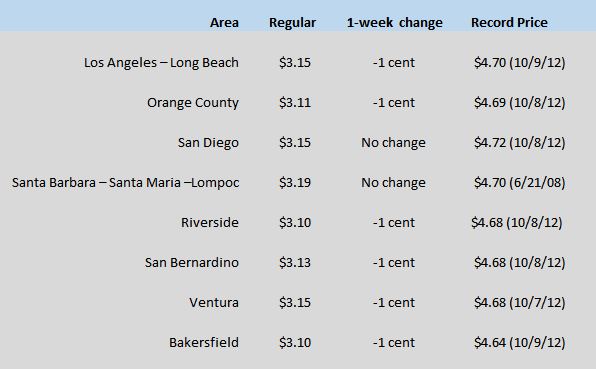