The average price of gasoline continued to decline last week but at a slower pace in the face of a large draw from gasoline inventories nationally, according to the Automobile Club of Southern California's Weekend Gas Watch. Today’s retail statewide average is $2.75 a gallon for regular unleaded, which is three cents less than last week and $1.34 less than last year.

“The Energy Information Administration noted that gasoline inventories dropped by a significant 3.7 million gallons in the past week, which means there is more driving occurring than in prior weeks,” said Auto Club spokesman Jeffrey Spring. “Prices are still declining, but if demand continues at this higher pace, we may be nearing the bottom of the price curve.”

The Weekend Gas Watch monitors the average price of gasoline. As of 9 a.m. on April 30, averages are: 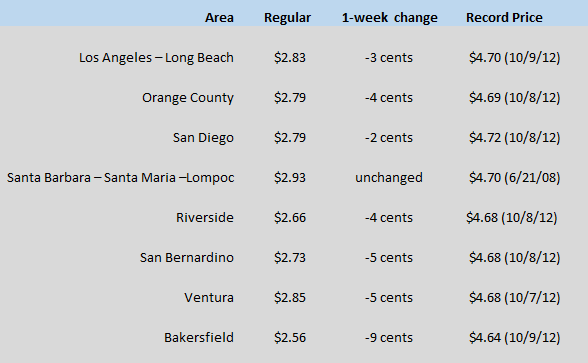