As AAA reports about one-third of Californians are planning fall trips, today’s average gas prices indicate travelers will pay significantly less to fill up than at this time during 2018 and 2019, according to the Automobile Club of Southern California’s Weekend Gas Watch. Today’s retail statewide average is $3.20 a gallon for regular unleaded, which is one cent lower than last week.

“Supplies of the ‘summer blend’ of California gasoline are still plentiful, but prices are still just inching downward,” said Auto Club spokesman Jeffrey Spring. “However, fall gas prices have not been this low since 2017, and the 80 percent of fall travelers who plan to drive to their destinations will save about $16 per fill-up compared to last year at this time.”

The Weekend Gas Watch monitors the average price of gasoline. As of 9 a.m. on Oct. 15, averages are: 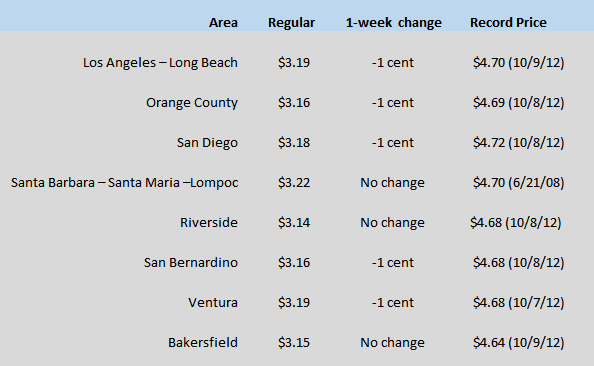