The war in Ukraine combined with continued problems at one of Southern California’s largest refineries created the worst one-week gas price jump ever locally, according to the Auto Club’s Weekend Gas Watch. However, there are signs the double-digit daily price increases may be coming to an end.

“Yesterday, oil prices began dropping after the United Arab Emirates announced it would increase oil production and encourage other OPEC members to do the same,” said Auto Club spokesman Doug Shupe. “However, locally there appears to be an issue with the Torrance PBF refinery after a power outage has caused five days of ‘unplanned flaring’ there, which is a sign of a breakdown that could disrupt gas supply. It remains to be seen whether that will continue to drive pump prices up even if oil prices drop more.”

The Weekend Gas Watch monitors the average price of gasoline. As of 9 a.m. on March 10, averages are: 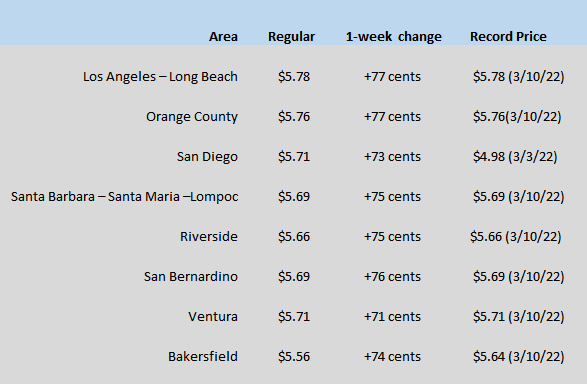