Increased gasoline stockpiles and refinery production levels are helping to push down Southern California gas prices below their record levels of near or over $6 a gallon reached last week, according to the Auto Club’s Weekend Gas Watch.

“Despite reports of flaring and delayed restarts at two local refineries, the Energy Information Administration is reporting that refinery utilization rates on the West Coast are at more than 90 percent, which is a seven-month high point,” said Auto Club spokesman Doug Shupe. “This has allowed gasoline stockpiles to surge by a million barrels over the previous week, although Oil Price Information Service reports the stockpile level is still below normal levels for this time of year.”

The Weekend Gas Watch monitors the average price of gasoline. As of 9 a.m. on April 7, averages are: 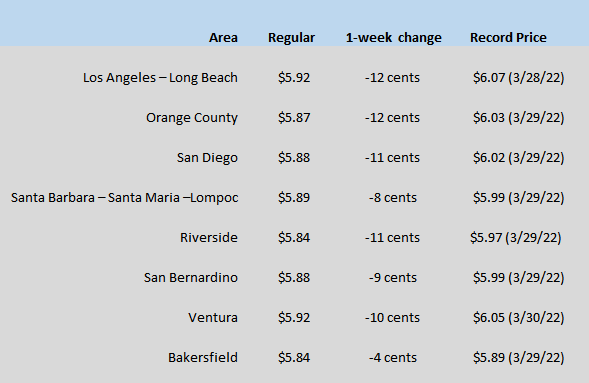