Despite a 30 percent decrease in oil prices in the past week that reversed itself partially today, Southern California gas prices continued rising toward the $6 mark, although much more slowly than in the previous week, according to the Auto Club’s Weekend Gas Watch.

The average price for self-serve regular gasoline in California is $5.79, which 10 cents higher than last week. The average national price is $4.29, which is three cents lower than a week ago as many other areas of the country saw some gas price relief from lower oil prices.

“The Torrance PBF refinery is having issues restarting a key unit that went offline after a March 6 power outage, and that supply issue is continuing to put upward pressure on gas prices locally,” said Auto Club spokesman Doug Shupe. “At the same time, oil prices have rebounded today above $100 per barrel.”

The Weekend Gas Watch monitors the average price of gasoline. As of 9 a.m. on March 17, averages are: 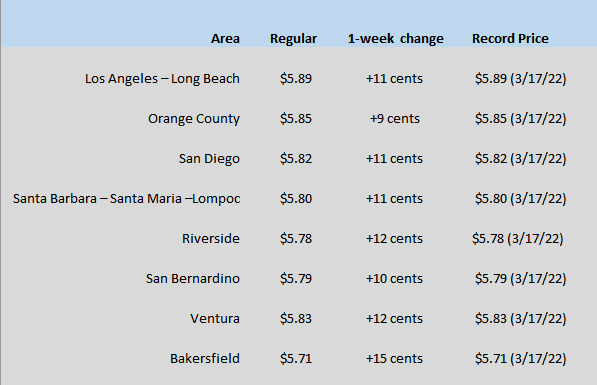