Gas prices reversed course very slightly in the last couple of days throughout Southern California after setting new daily price records all this month and signs are pointing to steeper declines ahead, according to the Auto Club’s Weekend Gas Watch. The average price for self-serve regular gasoline in California is $6.43, which is three cents higher than last week and a penny below the all-time record of $6.44 set on Tuesday. The average national price is $5.01, which is four cents higher than a week ago and also a penny below the record price on Tuesday.

"A very volatile week for the U.S. economy and a slight downturn in consumer demand reported by the EIA, which is likely due to record high prices, have caused a plunge of nearly 60 cents on the Los Angeles wholesale gasoline market this past week," said Auto Club spokesperson Doug Shupe. "Hopefully that decline will soon be reflected in price reductions at the pump."

With almost all local gas stations charging more than $6 a gallon for regular unleaded, gas thefts have continued to victimize Southern California drivers and the resulting damage to gas tanks can cost $1,000 or more to fix. The Auto Club recommends the following tips to avoid becoming a gas theft victim:

The Weekend Gas Watch monitors the average price of gasoline. As of 9 a.m. on June 16, averages are: 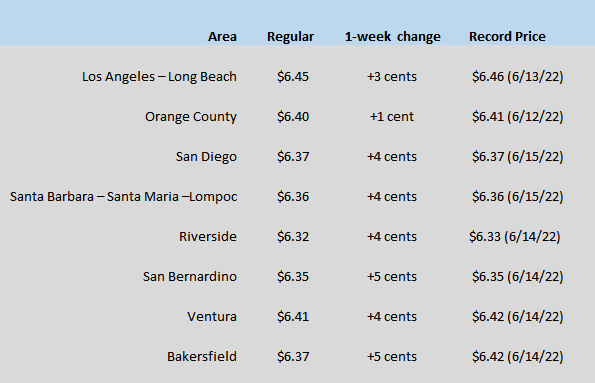