Southern California gas prices continue dropping as Christmas and New Year’s Day approach, but there are signs the price drops are slowing, according to the Auto Club’s Weekend Gas Watch. The average price for self-serve regular gasoline in California is $4.34, which is 11 cents lower than last week. The average national price is $3.10, which is nine cents lower than a week ago.

“After three historically large price spikes in 2022, Southern California drivers are finally getting some relief at the pump and at several gas stations they can pay less than $3.80 a gallon for regular unleaded,” said Auto Club spokesperson Doug Shupe. “Unfortunately, it looks like wholesale gasoline prices have bounced up as refineries have increased their maintenance activities and fuel inventories have shrunk, so it is uncertain how much longer the local price decreases will last.”

The Weekend Gas Watch monitors the average price of gasoline. As of 9 a.m. on Dec. 22, averages are: 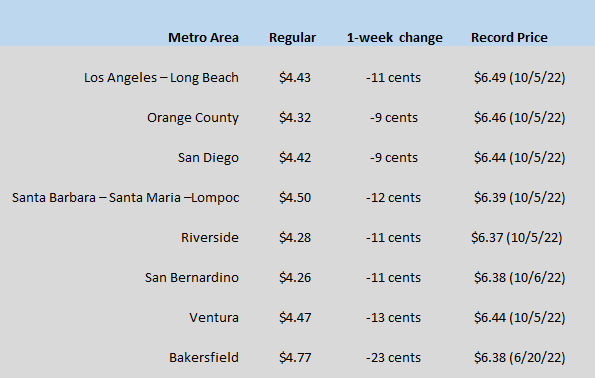