The Automobile Club of Southern California is projecting that Pacific state residents will take 107.1 million trips of at least 50 miles between July 1 and Sept. 30, which includes the Independence Day and Labor Day holidays. That number is 17 percent lower than the 129 million trips taken in last year’s third quarter and is the lowest number of third-quarter trips taken since 2013.

The last time states in the Pacific Region experienced a decline in third-quarter travel was in 2009, when trips dropped by 6.4 percent compared to 2008. This year’s travel decline percentage is the largest since AAA began tracking travel patterns in 2000. 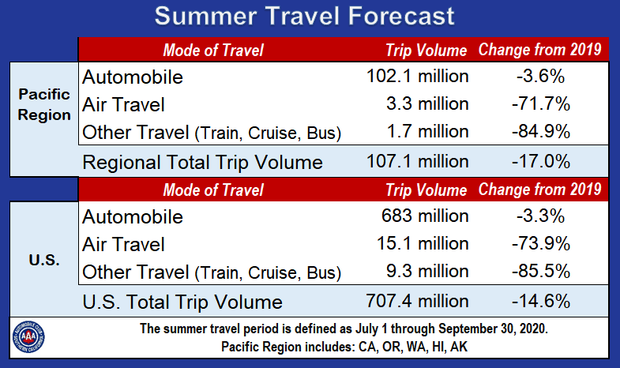 Travel by car during the third quarter is expected to decline by just 3.6 percent among residents of California, Oregon, Washington, Hawaii and Alaska as many travelers opt to take road trips instead of a flight or a cruise. More than 102 million driving trips are expected in the third quarter, compared to 105.9 million during the same period last year.

Air travel this summer is expected to decrease by 72 percent to 3.3 million trips among Pacific state residents – the lowest number of trips by air in 20 years.

The biggest decrease in third-quarter travel is among those taking another mode of transportation such as a cruise, bus, or train. Just 1.7 million of these types of trips are projected to take place – an 85 percent decrease over the same time last year and the lowest number recorded in the last 20 years. Cruise lines have cancelled trips until mid-September, and transit ridership has dropped significantly.

Nationally, AAA projects more than 707 million trips in the third quarter, which is 14.6 percent lower than last year. About 683 million car trips are expected nationwide – a 3.3 percent decline from last year. Vacation flights are expected to drop by 74 percent to 15.1 million, while other modes of trips such as cruises will drop by 85 percent to 9.3 million. Were it not for the pandemic, AAA would be projecting 857 million trips during the third quarter, a 3.6% increase over last year.

“This has been an unprecedented time in our nation and world, but we are hearing from so many of our members who want guidance on how to get out and travel in a safe and healthy manner,” said Filomena Andre, the Auto Club’s vice president for travel products and services. “The good news is that in California, we have so many nearby destinations that are outdoor natural wonders. And our travel partners have quickly stepped up to provide safe and sanitary environments, from hotels to tour and attraction operators.”

Andre said that hotel and rental car bookings have been gradually increasing since April, and last-minute bookings between 48 hours and seven days before departure are significantly higher than normal. “Travelers may not yet be aware that most travel providers are offering full-refund cancellation policies for up to 24 hours before arrival,” she said.

The Auto Club recommends travelers use the AAA TripTik Planner, AAA.com/TripTik, to map out their route ahead of time. The TripTik Planner now includes COVID-19 Travel Restriction map, which will assist travelers in planning their hotel, food and restroom stops. AAA also recommends people use AAA.com/roadtrips to find scenic road trip suggestions throughout the U.S.

Los Angeles and San Diego are among the Top Ten most-searched TripTik destinations between mid-March and mid-June of this year:

Transportation forecaster INRIX is projecting that travelers to the Los Angeles and San Diego areas will see lower traffic congestion than normal throughout the third quarter. Other metropolitan areas in the West that are expected to experience lower-than-normal traffic congestion this summer include San Francisco, Seattle and Phoenix.

Southern California gas price averages as well as those across the country have been steadily rising in recent weeks, and many local average prices are more than $3 a gallon. However, travelers in most areas should still be able to find prices lower than that average by using a tool such as the free AAA Mobile app, which can help drivers find the fueling stations with the lowest prices wherever they are.

The top 10 most popular hotel destinations since mid-March based on AAA Travel bookings are:

Because of the pandemic’s impacts on travel, AAA did not release Memorial or Independence Day travel forecasts.  AAA’s Q3 projections are based on economic forecasting and research by IHS Markit, a London-based business information provider. For the purposes of this forecast, the summer travel period is defined as July 1 through September 30. In cooperation with AAA, IHS Markit developed a unique methodology to forecast actual domestic travel volumes, using macroeconomic drivers such as employment; output; household net worth; asset prices including stock indices; interest rates; housing market indicators and variables related to travel and tourism, including prices of gasoline, airline travel and hotel stays. The complete AAA/IHS Markit forecast is available here.