While gas prices throughout the U.S. continued skyrocketing at levels not seen since the start of the Ukraine war due to continued uncertainties about world gasoline supply, Southern California pump prices rose more moderately in response to one major supplier being offline for maintenance, according to the Auto Club’s Weekend Gas Watch. The average price for self-serve regular gasoline in California is $5.85, which is nine cents higher than last week. The average national price is $4.42, which is 17 cents higher than a week ago.

“The Phillips 66 Wilmington refinery has been undergoing planned maintenance for nearly a month, keeping upward pressure on local prices, according to Oil Price Information Service,” said Auto Club spokesman Doug Shupe. “Another phenomenon that has occurred during this latest price runup is that premium gasoline has become even more expensive compared to regular grade gasoline. The Auto Club’s Automotive Research Center has found that if your vehicle’s manual just recommends premium fuel and does not require it, the vehicle will operate safely and efficiently with the much less expensive regular gas.”

The Weekend Gas Watch monitors the average price of gasoline. As of 9 a.m. on May 12, averages are: 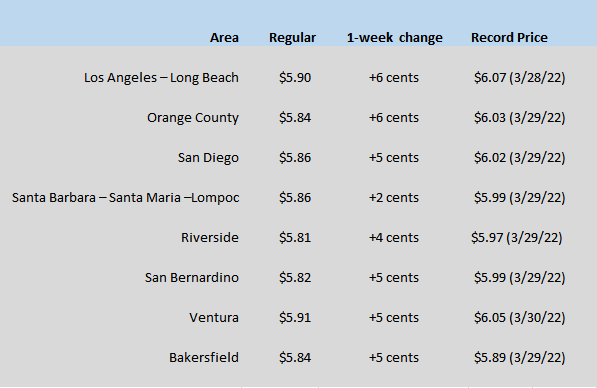