Southern Californians continue to pay near-record prices at the pump just weeks before the traditional “spring spike” season that typically brings gas price increases averaging 50 cents a gallon, according to the Auto Club’s Weekend Gas Watch.  The average price for self-serve regular gasoline in California is $4.65, which is unchanged for the week and six cents below the record price of $4.71 reached in late November.  The average national price is $3.32, which is two cents higher than a week ago.

“Not counting 2020, when the pandemic shut down gas demand, the typical Los Angeles spring gas price spike since 2017 is about 54 cents per gallon, ranging from a low of 21 cents in 2017 to a high of 86 cents in 2019,” said Auto Club spokesman Jeffrey Spring. “Given the lack of relief in pump prices due to continued high oil prices, it’s increasingly likely that Southern California gas prices will reach new record highs sometime in the next few months.”

The Weekend Gas Watch monitors the average price of gasoline. As of 9 a.m. on Jan. 20, averages are: 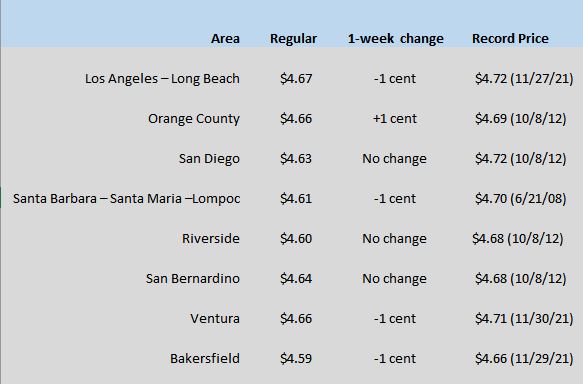