Jittery oil markets caused a one-day gas price spike across the country today that pushed the average Los Angeles gas price up eight cents to over $5 a gallon, and many other local areas are close to that level, according to the Auto Club’s Weekend Gas Watch. The average price for self-serve regular gasoline in California is $4.94, which is a new record for the state and 17 cents higher than last week. The average national price is $3.73, which is 21 cents higher than a week ago.

“In addition to oil prices spiking due to concerns about Russian oil supply being removed from Western markets, Southern California is experiencing some supply issues that tend to happen during the spring when refineries typically undergo maintenance,” said Auto Club spokesman Doug Shupe. “The California Energy Commission reported that the state’s gasoline stocks are down by about six percent from last week, which also puts upward pressure on gas prices.”

The Weekend Gas Watch monitors the average price of gasoline. As of 9 a.m. on March 3, averages are: 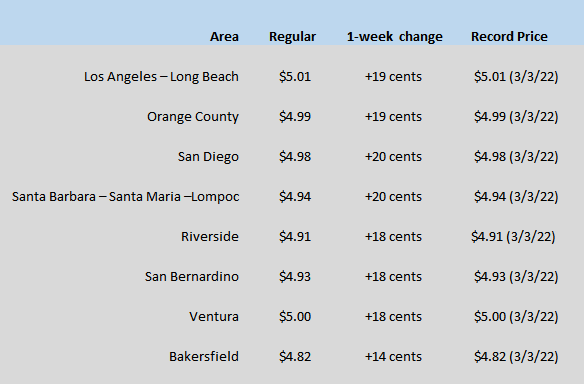