Southern California gas prices rose in response to wholesale price increases last week and earlier this week, according to the Auto Club’s Weekend Gas Watch. The average price for self-serve regular gasoline in California is $5.76, which is seven cents higher than last week. The average national price is $4.25, which is 11 cents higher than a week ago.

“Gas prices rose throughout the U.S. this past week because of continued supply concerns related to Russian oil,” said Auto Club spokesman Doug Shupe. “Continued high gas prices have many consumers thinking about buying more fuel-efficient or alternative fuel vehicles, and the new AAA Car Guide produced by the Auto Club’s Automotive Research Center is now available to help them assess their options.”

The Weekend Gas Watch monitors the average price of gasoline. As of 9 a.m. on May 5, averages are: 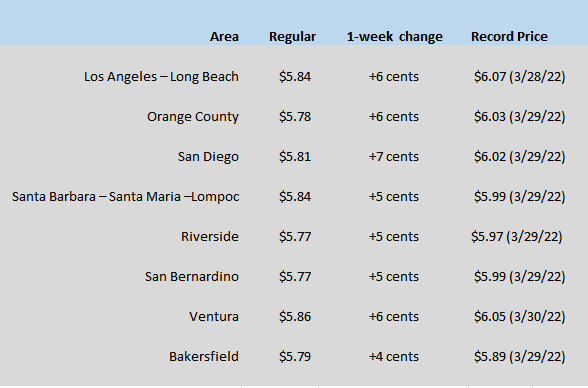