The early introduction of “winter blend” gasoline to Southern California gas stations has sent prices tumbling downward a week after they reached new all-time record high levels, according to the Auto Club’s Weekend Gas Watch. The average price for self-serve regular gasoline in California is $6.20, which is 22 cents lower than last week. The average national price is $3.91, which is four cents higher than a week ago.

“Gas prices would have to come down by about $1.20 a gallon from last week’s records in most areas to completely erase the spike that began in September, and there is a possibility they could drop even more if wholesale gasoline prices continue downward,” said Auto Club spokesperson Doug Shupe. “When prices are dropping, it’s more important for consumers to shop around and make sure they are not overpaying for gas by using a tool like the free AAA Mobile app. Most drivers should easily be able to find gas stations charging less than $6 a gallon for regular unleaded, and the local stations with the lowest prices today are charging less than $5.60.”

The Weekend Gas Watch monitors the average price of gasoline. As of 9 a.m. on Oct. 13, averages are: 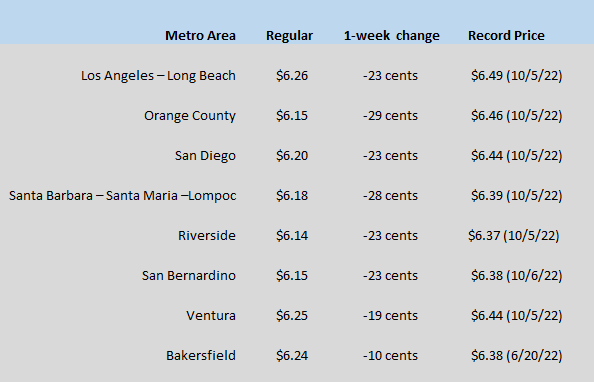