Just in time for the start of Thanksgiving holiday getaways, Southern California gas prices began rapidly dropping again after reports of reduced demand and rebuilding of gasoline inventories, according to the Auto Club’s Weekend Gas Watch. The average price for self-serve regular gasoline in California is $5.37, which is nine cents lower than last week. The average national price is $3.73, which is seven cents lower than a week ago.

“Last week, Southern California gas prices stopped dropping on news of lower inventories, but that situation seems to have been resolved in combination with reports of lower fuel demand,” said Auto Club spokesperson Doug Shupe. “The Auto Club is projecting an all-time record number of 4.5 million Southern California Thanksgiving travelers next week, with 3.9 million of them driving to their destinations, so demand will likely increase in the coming days.”

The Weekend Gas Watch monitors the average price of gasoline. As of 9 a.m. on Nov. 17, averages are: 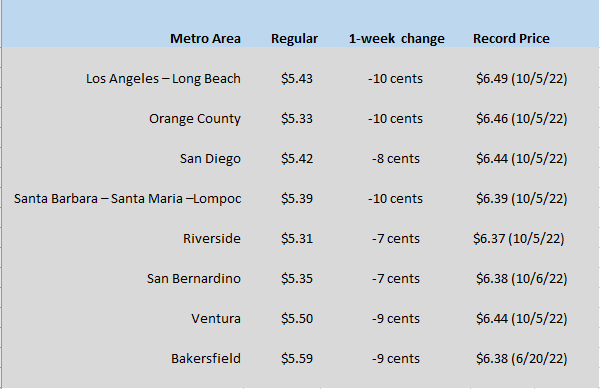