Southern California refineries are undergoing their annual maintenance season along with some unplanned breakdowns, but so far it has not affected prices at the pump, according to the Automobile Club of Southern California's Weekend Gas Watch. Today’s retail statewide average is $3.52 a gallon for regular unleaded, which is one cent lower than last week.

“While concerns about the coronavirus are pushing down demand for oil and gasoline nationwide, locally our gas prices are more affected by the performance of our refineries,” said Auto Club spokesman Jeffrey Spring. “Once gas stations start selling the more expensive summer blend of gasoline, which will happen over the next couple of weeks, we could see price increases that reflect both the increased production costs and the constrained supply if these unplanned refinery issues aren’t quickly resolved.”

The Weekend Gas Watch monitors the average price of gasoline. As of 9 a.m. on Jan. 30, averages are: 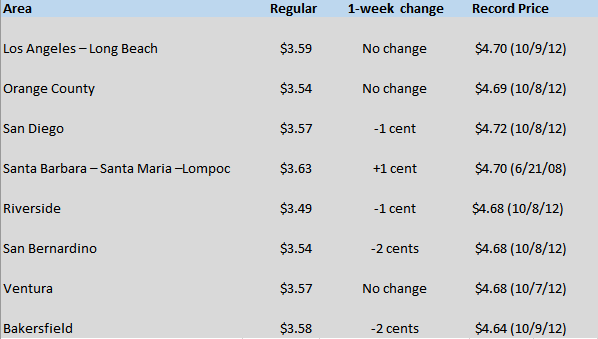