Travelers and shoppers have less green to spend on the holidays than in prior years as gas prices slowly back down from record levels, according to the Auto Club’s Weekend Gas Watch.  The average price for self-serve regular gasoline in California is $4.67, which is one cent lower than last week and four cents below the all-time record price of $4.71 reached in late November.  The average national price is $3.32, which is down two cents from a week ago.

The average price of self-serve regular gasoline in the Los Angeles-Long Beach area is $4.68 per gallon, which is one cent lower than last week, unchanged from last month, $1.54 higher than last year and four cents lower than the all-time record price of $4.72 set Nov. 27. In San Diego, the average price is $4.63, which is down one cent from last week and last month, $1.47 higher than last year, and nine cents below its all-time record price reached in 2012.

“On average for this year to date, Southern California drivers have been paying $14.40 more for each 15-gallon fill-up than in 2020, and $6.15 more for each fill-up than in 2019,” said Auto Club spokesman Jeffrey Spring. “Unfortunately, it looks like even with price decreases, average local prices are not going to drop below $4.50 a gallon before the end of the year.”

The Weekend Gas Watch monitors the average price of gasoline. As of 9 a.m. on Dec. 16, averages are: 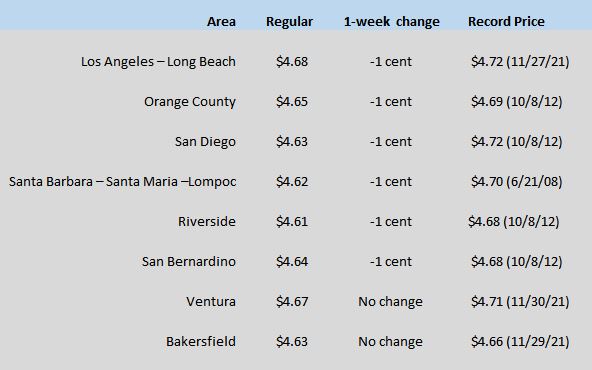