High demand for travel as we head into the summer and continued concerns about global and local supply of gasoline will continue to put upward pressure on pump prices, according to the Auto Club’s Weekend Gas Watch. The average price for self-serve regular gasoline in California is $6.21, which is 14 cents higher than last week. The average national price is $4.72, which is 12 cents higher than a week ago.

“Memorial Day travel volume added to the demand for gasoline last weekend which had a direct impact in gas prices here in Southern California and the rest of the country,” said Auto Club spokesman Doug Shupe. It is hard to know what will happen with prices, but the upward pressure will likely last in the coming weeks and months as people take summer road trips.”

The Weekend Gas Watch monitors the average price of gasoline. As of 9 a.m. on June 2nd, averages are: 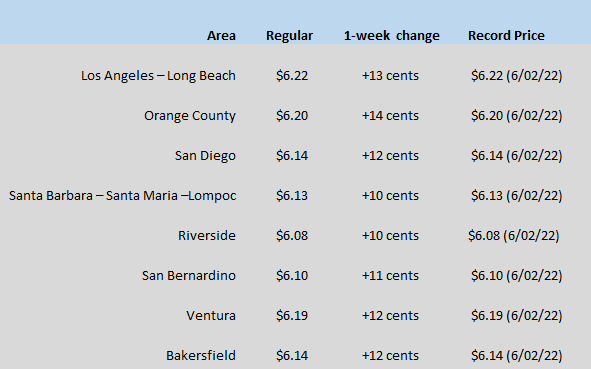