Southern California gas prices broke new records this week, but appear to be reversing course after a California Air Resources board decision to allow gas stations to sell “winter blend” one month early, according to the Auto Club’s Weekend Gas Watch. The average price for self-serve regular gasoline in California is $6.42, which is 24 cents higher than last week. The average national price is $3.87, which is nine cents higher than a week ago.

“Air quality regulations normally require ‘summer blend’ gasoline to be sold to drivers through the end of October, but the state’s decision to allow ‘winter blend’ sales early, in addition to imports arriving soon and local refineries coming back online following maintenance, should help alleviate the state’s gas supply crisis,” said Auto Club spokesperson Doug Shupe. “While all Southern California average prices are well above $6 a gallon today, we expect them to move lower in the coming days and weeks. It’s important for drivers to know that there already are dozens of stations selling gas for less than $6 and they can find them using the free AAA Mobile app.”

The Weekend Gas Watch monitors the average price of gasoline. As of 9 a.m. on Oct. 6, averages are: 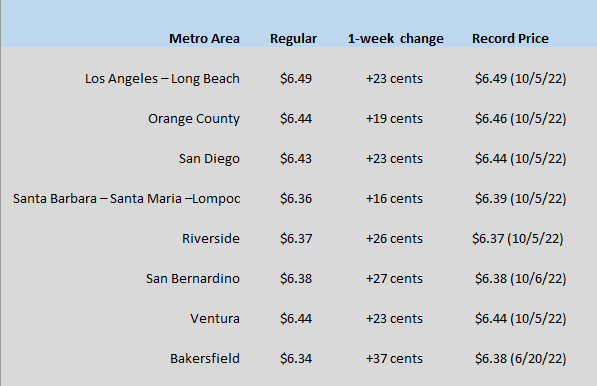