Southern California gas prices continue to drop significantly with plenty of room to plunge further after the huge price spike that ended earlier this month, according to the Auto Club’s Weekend Gas Watch. The average price for self-serve regular gasoline in California is $5.64, which is 24 cents lower than last week. The average national price is $3.76, which is eight cents lower than a week ago.

“This morning’s Los Angeles wholesale gasoline price is $1.86 below its all-time record on Sept. 27 and $1.40 below its Oct. 4 price, just before California announced it would allow early sales of winter blend gasoline and helped to end the supply crisis that caused record Southern California pump prices in September and October,” said Auto Club spokesperson Doug Shupe. “Gas station price averages have dropped by 75 to 90 cents from their record levels in most areas so far, so there should still be room for additional substantial price drops as long as wholesale prices don’t significantly increase.”

The Weekend Gas Watch monitors the average price of gasoline. As of 9 a.m. on Oct. 27, averages are: 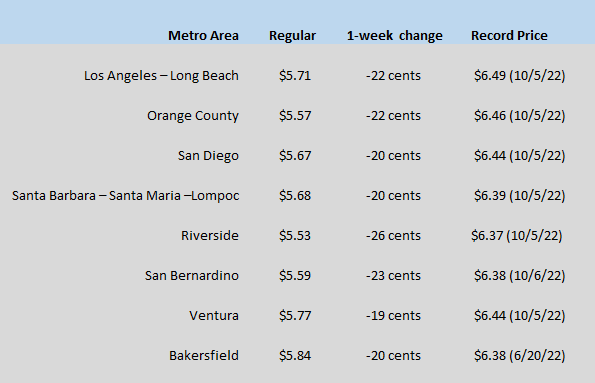