For the fifth straight week, Southern California gas prices changed by just a penny or less, remaining within a dime or less of all-time record levels, according to the Auto Club’s Weekend Gas Watch.  The average price for self-serve regular gasoline in California is $4.65, which is down one cent for the week and six cents below the record price of $4.71 reached in late November.  The average national price is $3.30, which is the same as a week ago.

“Oil prices are at their highest level since November, when many California areas set new gas price records.” said Auto Club spokesman Jeffrey Spring. “However, gas prices locally aren’t going up much because they never dropped much below their November levels.”

The Weekend Gas Watch monitors the average price of gasoline. As of 9 a.m. on Jan. 13, averages are: 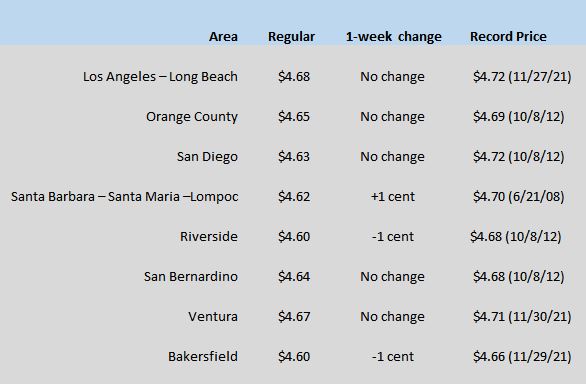