Increased imports and local supplies of gasoline combined with lower demand are helping to rapidly push down Southern California gas prices, according to the Auto Club’s Weekend Gas Watch. The average price for self-serve regular gasoline in California is $5.72, which is nine cents lower than last week. The average national price is $4.07, which is eight cents lower than a week ago.

“Southern California’s sky-high gas prices this year have reduced demand, so they are coming down quickly with more supply available,” said Auto Club spokesman Doug Shupe. “There are even a few stations now charging less than $5 a gallon, and we would expect the number of under-$5 stations to increase in the coming days.”

The Weekend Gas Watch monitors the average price of gasoline. As of 9 a.m. on April 14, averages are: 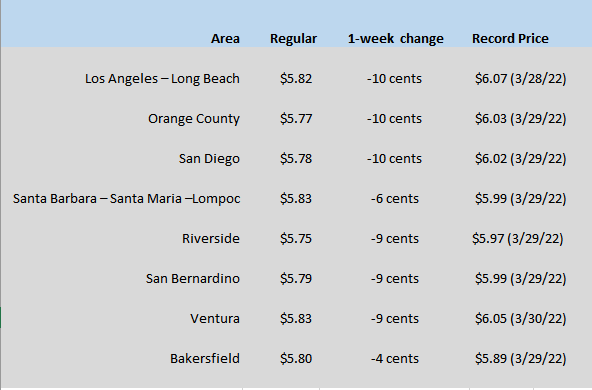