Southern California gas prices dropped for the third week in a row, but not by as much as in the prior two weeks, according to the Auto Club’s Weekend Gas Watch. The average price for self-serve regular gasoline in California is $5.69, which is three cents lower than last week. The average national price is $4.12, which is five cents higher than a week ago.

“The Energy Information Administration reported Wednesday that West Coast gasoline stockpiles shrank over the previous week, as some imports that were expected for California are reportedly being redirected to East Coast cities that are having supply issues,” said Auto Club spokesman Doug Shupe. “Los Angeles wholesale gasoline prices rose yesterday after that news, but they are still about 75 cents lower than the record high level reached on March 23, so there should still be plenty of room for prices to drop further.”

Make sure your tires are properly maintained and inflated to the correct level.

The Weekend Gas Watch monitors the average price of gasoline. As of 9 a.m. on April 21, averages are: 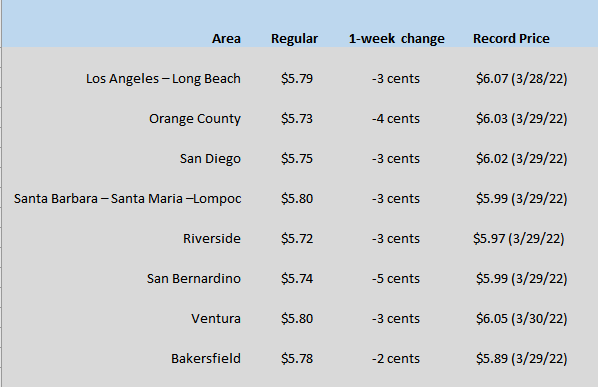