Local gas prices are now close to a dollar below their all-time record levels of a month ago in many areas after four straight weeks of hefty price declines following the September-October price spike, according to the Auto Club’s Weekend Gas Watch. The average price for self-serve regular gasoline in California is $5.49, which is 15 cents lower than last week. The average national price is $3.78, which is two cents higher than a week ago.

“Los Angeles wholesale gasoline prices are higher than they were two weeks ago, but still are about $1.80 below their all-time record level reached in late August, indicating that there is still a lot of room for declines in pump prices,” said Auto Club spokesperson Doug Shupe. “Almost every part of the metropolitan Los Angeles and San Diego areas should have at least a couple of gas stations charging less than $5 a gallon. Make sure to shop around virtually for the lowest prices using a tool such as the free AAA Mobile app to avoid overpaying for gas.”

The Weekend Gas Watch monitors the average price of gasoline. As of 9 a.m. on Nov. 3, averages are: 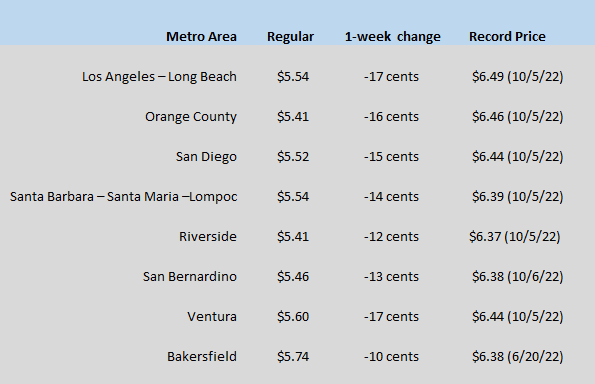