Just in time for Fourth of July travel, gas prices are continuing to drop from their record high points of two weeks ago as the Energy Information Administration reports that gasoline stockpiles across the country have increased, according to the Auto Club’s Weekend Gas Watch. The average price for self-serve regular gasoline in California is $6.29, which is seven cents lower than last week. The average national price is $4.86, which is eight cents lower than a week ago.

“Los Angeles wholesale gasoline prices have dropped to their lowest levels since May 20 as supplies have increased while demand has been affected by these very high pump prices,” said Auto Club spokesperson Doug Shupe. “That is great news for Independence Day travelers, especially since this is expected to be the third busiest July Fourth travel holiday on record. It’s not clear whether the three-cent gas tax increase that takes effect tomorrow will create a brief increase at the pump for drivers, or if the increase will just be cancelled out by the continuing drop in gas prices.”

California gas stations will start charging three cents more in taxes on gasoline beginning tomorrow as part of a law to automatically adjust the gasoline excise tax that passed in 2017 and was upheld by voters in 2018. The excise tax funds are used to pay for transportation projects and services.

The Weekend Gas Watch monitors the average price of gasoline. As of 9 a.m. on June 30, averages are: 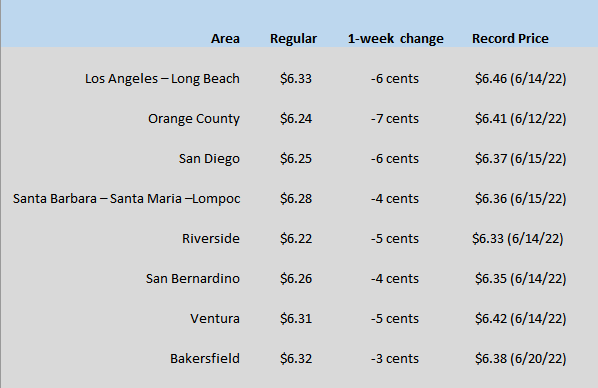