Southern California gas prices ticked up slightly in many areas and are closing out the year at levels that are a dime or less away from their all-time records, according to the Auto Club’s Weekend Gas Watch.  The average price for self-serve regular gasoline in California is $4.66, which is unchanged compared to last week and five cents below the record price of $4.71 reached in late November.  The average national price is $3.29, which is down three cents from a week ago.

“Southland drivers in 2021 paid an annual average of at well over $4 a gallon, eclipsing the annual average records set in 2012,” said Auto Club spokesman Jeffrey Spring. “The statewide average price for this year is $4.16 – 25 cents higher than the next highest-priced state, Hawaii.”

The Weekend Gas Watch monitors the average price of gasoline. As of 9 a.m. on Dec. 30, averages are: 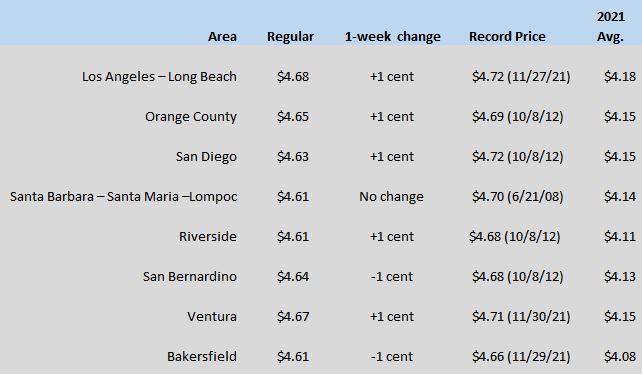