Continued lower inventories and refinery production levels statewide finally put a stop to hefty gas price decreases that started in October, according to the Auto Club’s Weekend Gas Watch. The average price for self-serve regular gasoline in California is $4.38, which is four cents higher than last week. The average national price is $3.16, which is six cents higher than a week ago.

“Besides Southern California’s local supply drawdown, oil prices have also risen to nearly $80 a barrel after dropping to their lowest level of 2022 a few weeks ago, and that has impacted gas prices nationwide,” said Auto Club spokesperson Doug Shupe. “Because of all the 2022 price spikes, this year is obviously the most expensive on record for gasoline. The 2022 average annual price is likely to close out at $5.55 a gallon for Los Angeles and at $5.50 a gallon for San Diego. Last year’s average annual price, which was also a record, was $4.18 a gallon for Los Angeles and $4.15 a gallon for San Diego.”

The Weekend Gas Watch monitors the average price of gasoline. As of 9 a.m. on Dec. 29, averages are: 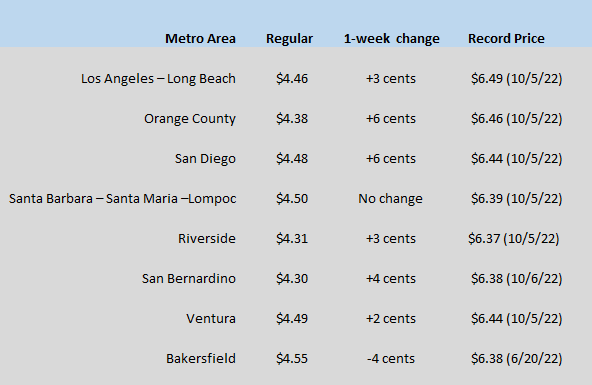