Bakersfield is now the only Southern California metropolitan area that has not yet set a new record high gasoline price this week, according to the Auto Club’s Weekend Gas Watch. The average price for self-serve regular gasoline in California is $4.73, which is a new record for the state and five cents higher than last week. The average national price is $3.52, which is four cents higher than a week ago.

“Oil prices continue to push toward $100 a barrel, but Los Angeles wholesale gasoline prices have plunged by about 14 cents a gallon since Monday, so we could see pump prices pause or drop soon if that trend continues,” said Auto Club spokesman Doug Shupe. “With premium fuel prices now averaging over $5 a gallon in many areas, the Auto Club urges drivers to double-check their vehicle owner manuals to find out if premium fuel is required or just recommended. If it is just recommended, regular unleaded gas is safe to use, according to the Auto Club’s Automotive Research Center.”

Other Auto Club tips to save on fuel include:

The Weekend Gas Watch monitors the average price of gasoline. As of 9 a.m. on Feb. 17, averages are: 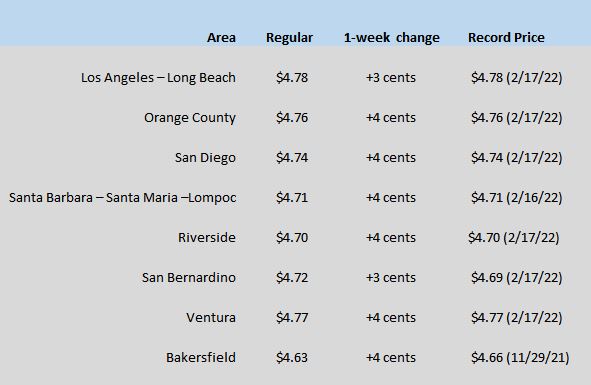