Los Angeles wholesale gasoline prices rose substantially this week, stopping the drop in prices at local gas stations and causing a slight uptick in the past day or two, according to the Auto Club’s Weekend Gas Watch. The average price for self-serve regular gasoline in California is $5.69, which is the same as last week. The average national price is $4.14, which is two cents higher than a week ago.

“There continues to be upward pressure on oil prices due to concerns that less Russian oil will enter the global market,” said Auto Club spokesman Doug Shupe. “As we get closer to the peak driving season of the year, the Auto Club encourages drivers to make fuel efficiency part of their daily routine.”

The Weekend Gas Watch monitors the average price of gasoline. As of 9 a.m. on April 28, averages are: 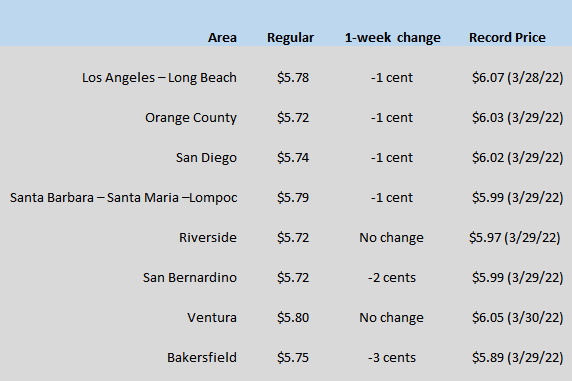