The fall of local gas prices is slowing down after five straight weeks of them dropping to close to a dollar below their record levels, according to the Auto Club’s Weekend Gas Watch. The average price for self-serve regular gasoline in California is $5.46, which is three cents lower than last week. The average national price is $3.80, which is two cents higher than a week ago.

“We are two weeks away from Thanksgiving, one of the busiest holidays for road trips, and also Southern California refineries are now emphasizing production of diesel over gasoline because of diesel shortages, so price declines may pause,,” said Auto Club spokesperson Doug Shupe. “Make sure to shop around virtually for the lowest prices using a tool such as the free AAA Mobile app to avoid overpaying for gas.”

The Weekend Gas Watch monitors the average price of gasoline. As of 9 a.m. on Nov. 10, averages are: 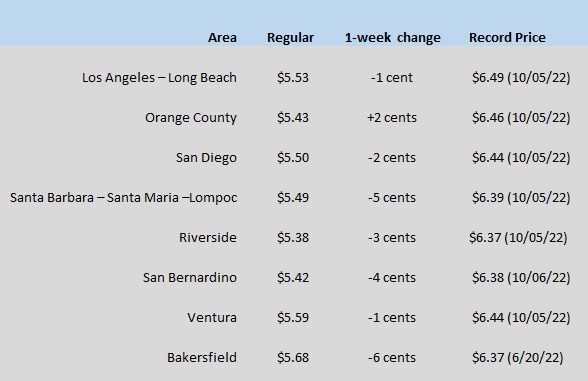