Several gas stations in Southern California are now charging less than $4 a gallon as prices continue plunging toward what should become the lowest levels of the year, according to the Auto Club’s Weekend Gas Watch. The average price for self-serve regular gasoline in California is $4.62, which is 28 cents lower than last week and a penny below the previous lowest price of 2022 reached on Jan. 27. The average national price is $3.33, which is 14 cents lower than a week ago and four cents higher than the year’s lowest average reached on Jan. 4.

“In coming days as long as current trends hold, we would expect every area of Southern California to drop below its cheapest prices of 2022, which were all reached in January and were generally between $4.60 and $4.70 a gallon ,” said Auto Club spokesperson Doug Shupe. “There has been an uptick in Los Angeles wholesale gasoline prices in the last couple of days due to some reported refinery maintenance, but the wholesale price today is still 30 cents lower than its previous lowest point of 2022 in late January.”

The Weekend Gas Watch monitors the average price of gasoline. As of 9 a.m. on Dec. 8, averages are: 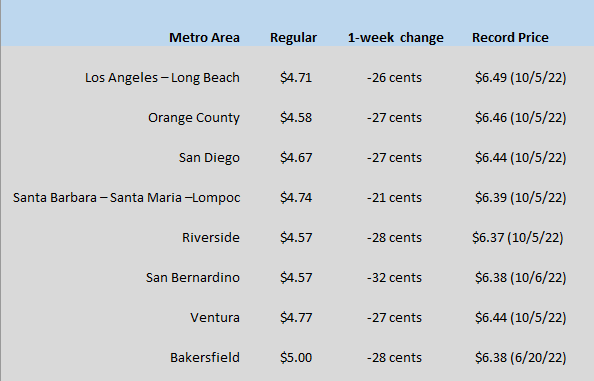