Most areas of Southern California now have average gas prices of less than $5 a gallon after additional hefty price declines in the last week, according to the Auto Club’s Weekend Gas Watch. The average price for self-serve regular gasoline in California is $4.90, which is 21 cents lower than last week. The average national price is $3.47, which is 12 cents lower than a week ago.

“Despite a record number of Southern California travelers hitting the road for Thanksgiving, average pump prices have dropped below $5 a gallon for the first time since early March,” said Auto Club spokesperson Doug Shupe. “Oil Price Information Service reports a substantial drop in demand statewide and high unleaded gas inventories. This week Los Angeles wholesale gasoline prices reached their lowest level of 2022, and if that trend holds, we should see additional pump price reductions. The least expensive gas station prices today are about $4.10 a gallon, so it’s possible we will see stations charging less than $4 a gallon soon.”

The Weekend Gas Watch monitors the average price of gasoline. As of 9 a.m. on Dec. 1, averages are: 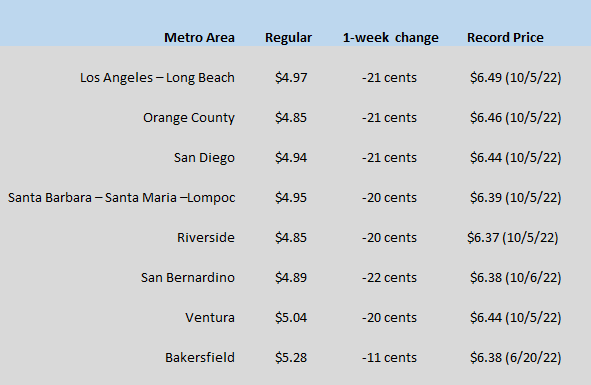