Editors Note: The Weekend Gas Watch is being published one day early due to the holiday.

A hefty gas price decline of more than 20 cents in the past week has now brought pump prices lower than at the start of the September-October price spike, but those driving to Thanksgiving holiday destinations will still be paying about 50 cents more per gallon than at this time last year, according to the Auto Club’s Weekend Gas Watch. The average price for self-serve regular gasoline in California is $5.16, which is 24 cents lower than last week. The average national price is $3.61, which is 13 cents lower than a week ago.

“With an all-time record number of 3.9 million Southern California Thanksgiving travelers hitting the road this week, the large price declines are very helpful for holiday getaway budgets,” said Auto Club spokesperson Doug Shupe. “The lowest-priced gas stations in Southern California are now charging less than $4.40 a gallon. Make sure to use a tool like the free AAA Mobile app during your travels to find the cheapest gas prices close to you.”

The Weekend Gas Watch monitors the average price of gasoline. As of 9 a.m. on Nov. 23, averages are: 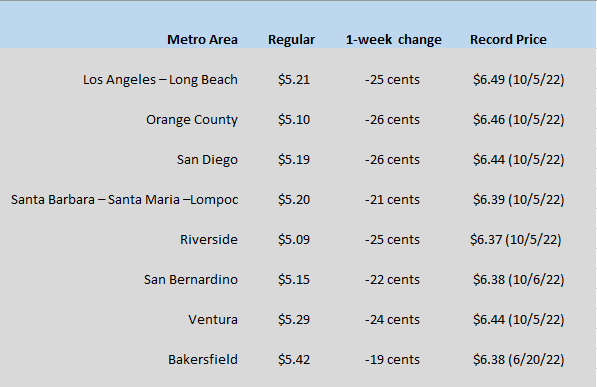