For only the second time in 20 years, California was the state with the highest average gas price for the year, even though prices continued declining locally for the eighth straight week, according to the Automobile Club of Southern California's Weekend Gas Watch. Today’s retail statewide average is $3.56 a gallon for regular unleaded, which is two cents lower than last week. The state’s annual average price for 2019 was $3.72 – 16 cents higher than the next most expensive state, Hawaii. 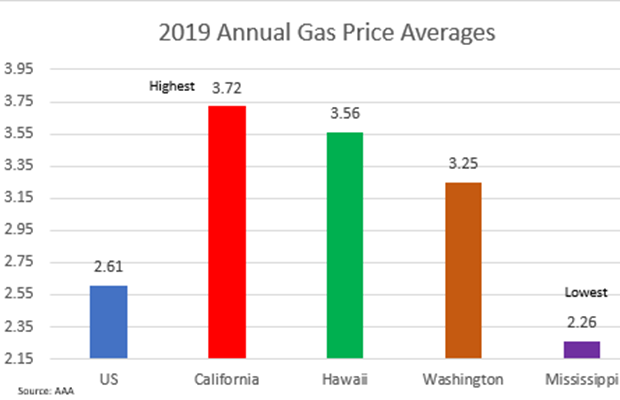 “California was one of the few states that went against the national trend of ending 2019 with a lower annual average gas price than in 2018,” said Auto Club spokesman Jeffrey Spring. “The US average annual national gas price dropped from $2.72 a gallon in 2018 to $2.61 a gallon in 2019, but California’s average rose from $3.56 in 2018 to $3.72 in 2019. About six cents of that rise can be attributed to increased taxes, with the rest happening due to refinery problems in October that drove average prices well above $4 a gallon.”

The only other year that California’s average annual price surpassed that of Hawaii was in 2015, which was the year of the major explosion at the Exxon Mobil refinery in Torrance that caused major supply issues.

The Weekend Gas Watch monitors the average price of gasoline. As of 9 a.m. on Jan. 2, averages are: